for the City of Albuquerque

The Future of Albuquerque, New Mexico

The City of Albuquerque, New Mexico, is one of the first cities to establish Smart City goals. Because of this forward thinking, City leadership connected with Mountain Vector Energy. The Energy and Sustainability Office was interested in the implementation of new technologies to understand the City’s utility consumption and identify areas of wasteful energy use.

Similar to most cities in the United States, the City of Albuquerque identified a problem–they had a significant amount of data on their utility usage, but accessing that data was cumbersome, time consuming and often inaccurate. In fact, energy managers can spend up to 75% of their time just gathering data. The City hoped that Mountain Vector Energy had a solution to help their energy management team devote more time to decision making and spend less time processing data.

The City of Albuquerque had some unique challenges that needed to be overcome. Those responsible for energy management were frustrated because energy data was spread across a multitude of logins and dashboards. The complicated systems required special expertise to translate and significant time commitment to operate correctly. Additionally, utility providers within the City structured their data differently, which created complicated compatibility differences between data sets. The City needed a partner, and Mountain Vector Energy approached the City of Albuquerque with a refreshing solution: Cufflink™.

Cufflink™ is a patented system that is designed to integrate seamlessly with existing systems and provide actionable intelligence on gas, water and electricity. Cufflink™ has the capability to create intuitive visualizations of energy usage and correlate the data with the amount spent in real time.

In areas where existing data sources are absent or otherwise unusable, the Cufflink™ device utilizes its own sensors that are designed to be easily installed. This hardware enables live data to be received by the Cufflink™ portal, which displays how much energy is being used and how much it is costing.

Waiting for a monthly utility bill to determine spending is an expectation of the past. The Cufflink™ system neatly organizes all of the different data streams into visualizations housed on a single portal. Visualizations within the portal can be viewed live or exported as reports for energy managers to easily read and use for decision making.

Within the City of Albuquerque are 3,645 utility meters that need to be accounted for, 9.6 million square feet spread across 681 buildings and an annual utility spend of over $25 million. Mountain Vector Energy was eager to deploy the Cufflink™ system in order to help the City meet their goals.

Cities like Albuquerque need more than an out-of-the box energy management system. When it comes to complex systems, there is no one-size-fits all. Mountain Vector Energy customized Cufflink™ to the specific needs of Albuquerque. Organizing and simplifying the information coming from multiple sources was key to leveraging the City’s vast data for intelligent decision-making. 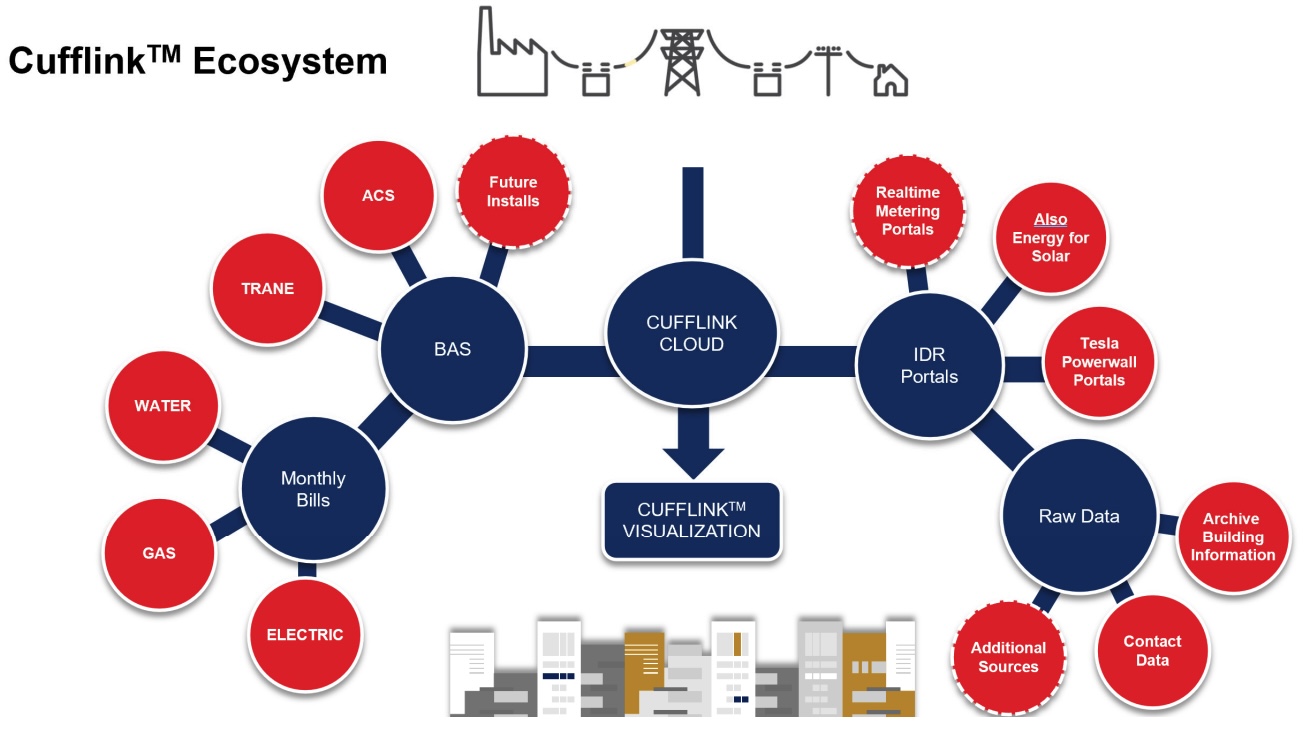 The vision: build an integrated data lake, machine learning ‘neural network based’ predictive models and both internal and public facing dashboards that are easy to use, outcome oriented, scalable, and easily adopted by other New Mexico public entities. 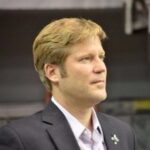 “This is the first-of-its-kind tool in the nation for a government that will actually be able to track in real time energy and water usage at all our facilities.”

Along with the introduction of the Cufflink™ system, Mountain Vector Energy also provided energy management services for the City of Albuquerque. With the implementation of Cufflink™ and data analysis provided by Mountain Vector Energy, the City’s energy managers have the information they need to make actionable decisions without spending the majority of their time gathering, cleaning and organizing data.

Mountain Vector Energy does the heavy lifting of aggregating the City’s data streams for water, electric and gas usage into a single platform while ensuring data accuracy, establishing baselines and identifying costly anomalies. Mountain Vector Energy gathers IDR data, layers it with historic data and presents insights to the City of Albuquerque.

Bringing the Data to the Front Lines

To increase the benefits of energy automation for the City of Albuquerque, Mountain Vector Energy continues to develop additional capability for the Cufflink™ ecosystem. The Leak Tracker App is one of these added developments and has been transformational in its ability to quickly reduce water waste by quickly notifying the right people. When an anomaly is discovered, recommendations are presented on what the problem could be, exactly where the problem is occurring, and what actions should be taken.

Additionally, when leaks did occur within the City, information provided by the leak tracker app enabled workers to quickly identify the location and problem, which led to a reduction of water waste totaling around $25,200 in per month savings. 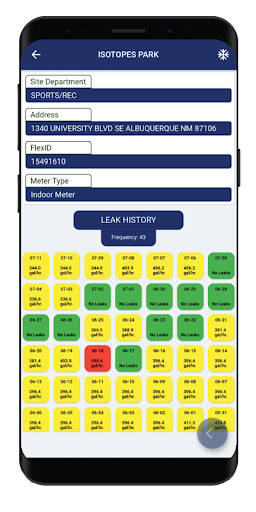 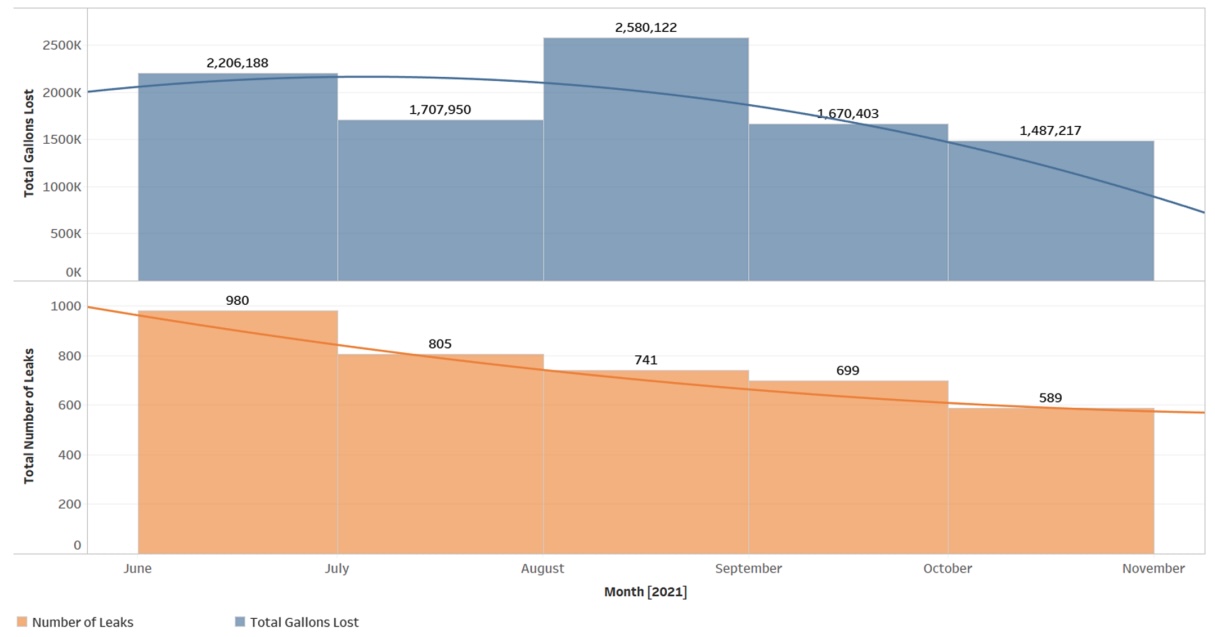 To help the City of Albuquerque participate, Mountain Vector Energy enrolled seven batteries (540 kW of capacity) in the program and integrated the batteries into a DERMS platform for automated dispatch. This allows the City to leverage existing assets to participate in utility market programs, support the local electric grid and generate revenue.

The City of Albuquerque’s energy managers now spend more of their time making actionable decisions based on the reports and insights from Mountain Vector Energy. They continue to automate and refine their systems to efficiently provide the right levels of building comfort while lowering their operating costs. When issues arise, notifications are sent to the specific people who are capable of taking action to resolve issues. After making energy-saving decisions, the City of Albuquerque is able to immediately measure impact.

Electricity: During the first year, Mountain Vector Energy characterized past, present and future performance for City of Albuquerque electricity. The City is now on track for 85% Renewable Energy by 2022 and 100% Renewable by 2025.

Water: Water Leak Notification Phone App reduced water costs by $25,200 per month. This was a 40% reduction in the quantity of leaks.

Landfill Gas: Identified opportunities for The City of Albuquerque to convert wasted emissions into productive energy to further the Net Zero Initiative and generate significant revenue. Characterized multiple opportunities to convert Landfill Flare Gas to a usable pipeline quality fuel source with options that include a zero cost engagement that can yield $427K per year for 15-20 years ($8.54M). 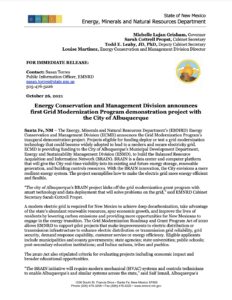